Click on a title for a short description of the book.
To order any of the titles listed below please visit our Ordering page. 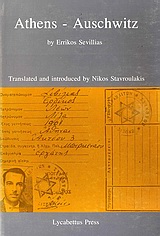 Errikos Sevillias was born in Athens in 1901 into a Sephardic family. He learned how to work in leather as a child and opened his own leather workshop when he was 16. From 1919 until 1923 he served in the Greek army, for three years fighting in Asia Minor. After the war he reopened his workshop, married, and had a daughter. Life, as he writes, "went along well" until he experienced "an inexplicable and unexpected great adventure," meaning Auschwitz.

Errikos Sevillias was killed in Athens by a motorcycle in 1974, when he was 73 years old. The manuscript of this book was found among his papers after he died. He describes the appalling events at Auschwitz with extraordinary calm, saying merely that he couldn't understand "what they wanted in doing such an unjust and evil thing." His simple statements of events give the clearest possible image of the indescribable.

The manuscript was translated by Nikos Stavroulakis, who also has provided an extremely useful historical outline of the Jewish presence in Greece with a description of the occupation and final solution.

Bonnie's Best Bites, by Bonnie Tangalos
Christians in the Arab East, by Robert B. Betts
Cookbook of the Jews of Greece, by Nicholas Stavroulakis
Delphi, by Alan Walker
Doorway to Greece, by Mary Winterer-Papatassos
Εγώ Είμαι, by Jean Klein
Ένας Ινδός Σωκράτης, by R. S. Balsekar
Falconera, by Alexis Ladas
In Sfakia, by Peter Trudgill
Jewish Sites in Thessaloniki, Brief History and Guide, by Rena Molho and Vilma Hastaoglou-Martinidi
Jüdische Orte in Thessaloniki, Ein historischer Rundgang, von R. Molho und V. Hastaoglou-Martinidi
Kos, by Chris and Christa Mee
Nauplion, by Timothy E. Gregory
Naxos, by John Freely
Paros, Roads, Trails, and Beaches, by Jeffrey Carson and James Clark
Patmos, by Tom Stone
Poros, by Niki Stavrolakes
St. John of Patmos and the Seven Churches of the Apocalypse, by Otto F. A. Meinardus
St. Paul in Greece, by Otto F. A. Meinardus
The Jews of Ioannina, by Rae Dalven
The Unwritten Places, by Tim Salmon
This Way to Paradise, Dancing on the Tables, by Willard Manus
Tom Stone's Greek Food and Drink Book, by Tom Stone